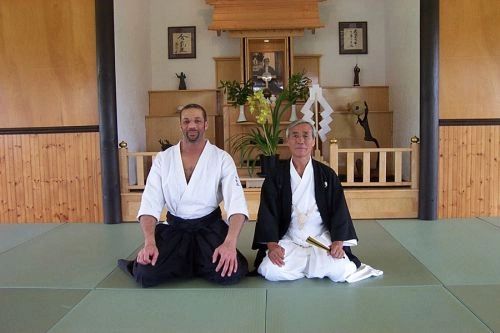 Dwayne Bolt sensei holds the rank of Godan. Yondan conferred by Hiroshi Ikeda shihan as well as Sandan. Shodan and Nidan via Mitsugi Saotome shihan.  Bolt sensei trained and studied with David Goldberg sensei, Godan of River of Life Center dojo in Fort Washington, Pennsylvania for well over ten years and teaching aikido since 1997.  Bolt sensei travels extensively throughout the country and the world, regularly training with Hiroshi Ikeda and Mitsugi Saotome shihans.  In addition Bolt sensei makes it a point to diligent consistently train with some of the highest ranking and most talented teachers in the world inclusive of but not limited to, the late Kevin Choate Sensei of Chicago Aikikai, Dan Messisco sensei of Dan Messisco.com, Chuck Weber and Charlie Page Sensei's of Baltimore Aikido, William Gleason Sensei of Shobu Aikido in Boston Massachusetts and Jimmy Sorrentino sensei of Aikido of Northern Virgina, just to name a few.

Bolt sensei’s aikido technique is one of seemingly minimal effort for maximum effect and results.  The first thing is “aiki”, or the harmony of energy within one’s own mind body and spirit.  This is accomplished by a proper relaxed posture and a focused mind.  You must receive the attacker’s power and redirect it.  The next step is to break the attacker’s balance or “kuzushi”.  The final step is the resolution of the focused technique or “zanshin”.  Sensei stresses proper ukemi or receiving the technique.  This is often referred as the person who get attacked, while colloquial this nomenclature is not entirely correct.  The relationship between Uke (receiver) and “Nage” (one who throws) is interconnected.  Both parties are involved 100% of the time.  Martial awareness must be present or serious injury or worse may occur.

Bolt sensei encourages his students to demand of themselves to push past their own comfort zones which will lead to greater depths of their personal intrinsic discoveries.